After some minor skirmishes, Major General John Buford is convinced that the Confederates are near the small town of Cashtown and that they will be marching on Gettysburg the next day. Buford sends a message to Gen. John Reynolds to come up quickly while he holds with his two brigades of cavalry and a battery of cannon.

He sends this letter to Gen. Meade:

I entered this place to-day at 11 a. m/ Found everybody in a terrible state of excitement on account of the enemy’s advance upon this place. He had approached to within half a mile of the town when the head of my column entered. His force was terribly exaggerated by reasonable and truthful but inexperienced men. On pushing him back toward Cashtown, I learned from reliable men that [R. H]. Anderson’s division was marching from Chambersburg by Mummasburg, Hunterstown, Abbottstown, on toward York. I have sent parties to the two first-named places, toward Cashtown, and a strong force toward Littlestown. Colonel Gamble has just sent me word that Lee signed a pass for a citizen this morning at Chambersburg. I can’t do much just now. My men and horses are fagged out. I have not been able to get any grain yet. It is all in the country, and the people talk instead of working. Facilities for shoeing are nothing. Early’s people seized every shoe and nail they could find.
I am, very respectfully, your obedient servant,

Not long after Brig. Gen. John Buford’s troopers arrived in Gettysburg on the late morning of June 30, 1863, he issued this circular in town to keep his men away from the booze…. 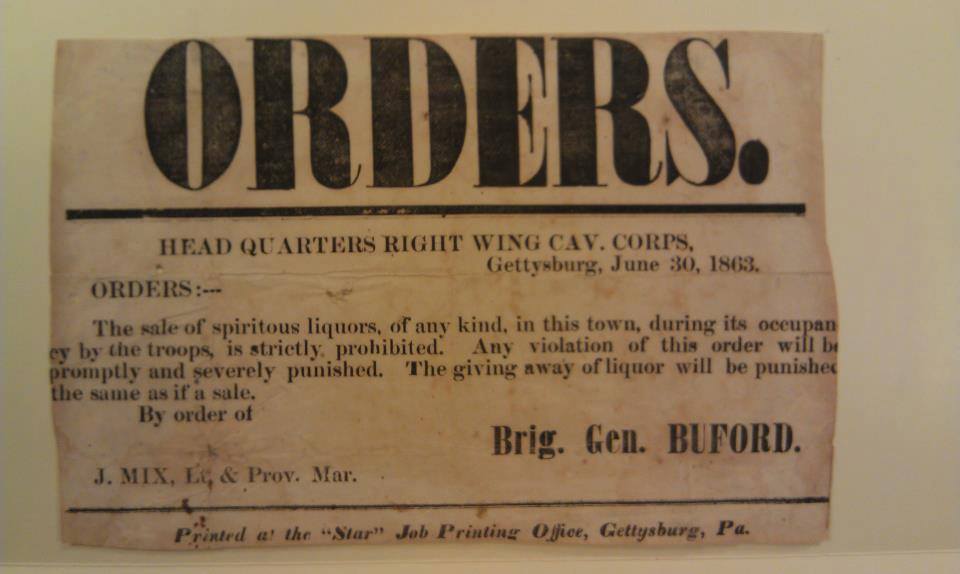