Recently a friend of mine asked me to do a Then and Now overlay of some dead Confederate soldiers who were buried in the Rose Farm at Gettysburg.  Based on some previous research, he was seeking out the original location where these brave soldiers were buried and photographed.  After spending some time with the original image doing the overlay, I decided to colorize the image.

The original image is called Unfinished Confederate graves near the center of the battlefield and was taken by Timothy O’Sullivan shortly after the battle of Gettysburg. 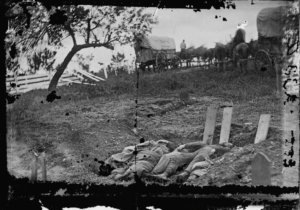 In the days immediately following the Battle of Gettysburg over 7,000 dead bodies were scattered around the battlefield.   According to one Confederate soldier, “The sights and smells that assailed us were simply indescribable-corpses swollen to twice their size, asunder with the pressure of gases and vapors…The odors were nauseating, and so deadly that in a short time we all sickened and were lying with our mouths close to the ground, most of us vomiting profusely.”  (GNMP)

According to historians, the finished grave in the background contains three soldiers from South Carolina.  Historian and Licensed Battlefield Guide Tim Smith states that there are two known photos showing nine dead Confederate soldiers in unfinished graves with headboards on the Rose Farm. He goes on to say that the soldier on the right isPvt. William Calvin Butler of the 3rd South Carolina Volunteers.  If you zoom in on the original image, you can actually read “WCButler, 3rd S.C.” on the headboard. (CWT)

The photo was taken right next to the Rose Barn.  Some accounts say that George Rose relocated the bodies so they would not contaminate his water well.  In 1871, a group from South Carolina contacted Dr. Rufus Weaver about reinterring the remains back home. With the exception of Pvt. Butler, the remains are buried in a common grave in Magnolia Cemetery in South Ca. Pvt. Butler was returned to his family and now rests in the family cemetery in  Head Springs SC. (Fink, 2016)

Based on maps, primary sources and other historians, my friend Dustin Heisey was able to precisely locate the location of the camera and the angle of the photograph.  Here is a Google Earth view of the Rose Farm showing the camera angle. 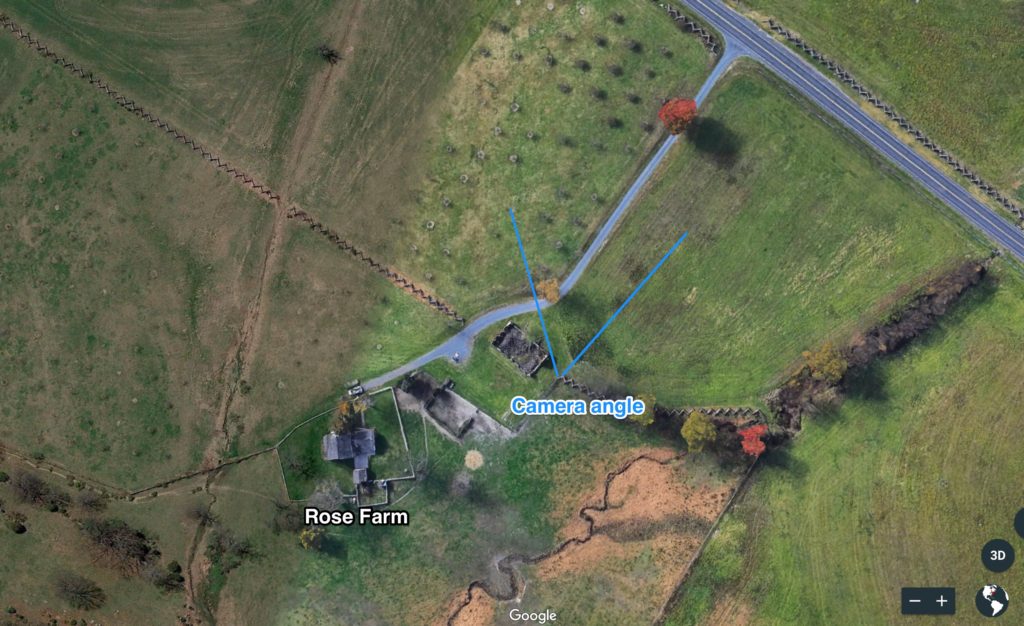 Finally, my colorization.  Colorizing dead soldiers is always difficult, but this one was enjoyable.  I have really improved my techniques and each one gets better.  Remember that you can learn to colorize Civil War photos in my tutorial videos: Part 1 and Part 2 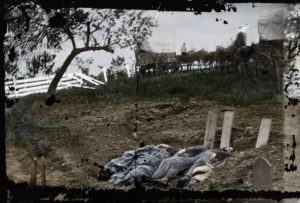