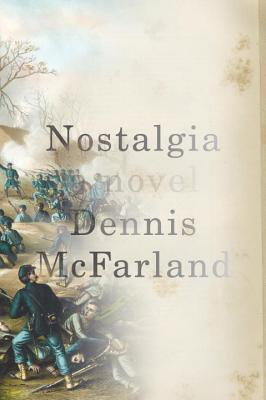 Did I mention that I was catching up on book reviews?  Next up is Nostalgia by Dennis McFarland. 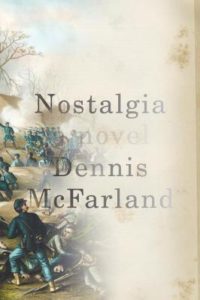 Set during the Civil War, this stunning novel from bestselling author Dennis McFarland follows a nineteen-year-old private who is struggling to regain his identity in an overturned American landscape.
`
In the winter of 1864, Summerfield Hayes, a pitcher for the famous Eckford Club, enlists in the Union army, leaving his beloved sister alone in their Brooklyn home. After a particularly grim experience on the battlefield—deserted by his comrades and suffering from deafness and disorientation—he attempts to make his way home but instead lands in a Washington military hospital, mute and unable even to write his name. Among the people he encounters in this twilit realm—including a compassionate drug-addicted amputee, the ward matron who only appears to be his enemy, and the captain who is convinced that Hayes is faking his illness—is a gray-bearded eccentric who visits the ward daily and becomes Hayes’s strongest advocate: Walt Whitman.

Nostalgia is well written and a very enjoyable book.  McFarland’s descriptions of the first days of the Wilderness campaign and of early baseball games is excellent and interesting.  Some of the most gripping parts of the story are in his description of the fate of wounded during the Civil War.  The book depicts Post Traumatic Stress Disorder in great detail and it truly brings those horrors to life for the reader.

On the downside, the book does bog down in parts and it becomes difficult to stay focused on the story.  Overall, I would recommend this book to any historical fiction fan.