During the Civil War, there were no cars, planes or other fancy transportation.  While the cavalry rode their horses between battlefields, the infantry walked.  The question is, how fast did they walk and how much ground could they cover?

In the Official Records of the Civil War, Major General Sedgwick said, “This command arrived on the field of Gettysburg on the afternoon of July 2, after a march of more than 30 miles.”  The question is, how long did it take them to march the 30 miles? 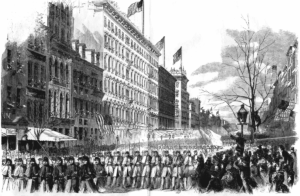 Image from Harper’s Weekly in May 1861

Casey’s Infantry Tactics for Infantry says that the “common step” is 28 inches at 90 steps per minute, the “quick-step” was the same at 110 per minute, and “double-quick” was 33 inches at 165 per minute. This breaks down into the following (sharpen your pencils):

Since the common step time was 90 steps (28″ step) per minute, that should equal 210′ per minute. Now consider that if a soldier would walk 50 minutes an hour and rest 10 minutes, he would travel 1.98 miles per hour. During and eight hours march, he would cover about 16 miles. In ten hours, he could cover almost 20 miles and twelve hours close to 24 miles.

Finally, at the double-quick, the rate increases to 165 steps (33″ step) per minute and that works to 454′ per minute. With the same 50 minutes of marching and rest 10 every hour, a soldier would travel 4.3 miles for every hour of “double time.” An eight-hour march would cover 34 miles if the soldiers could sustain that pace for an extended period.

So let’s take General Sedgwick’s 30-mile march and see how long it may have taken using five different scenarios:

Let me know what you come up with!