Prelude to Gettysburg – The Battle of Hanover

The Battle of Hanover, Pennsylvania was a small skirmish among Union and Confederate cavalry that had a significant 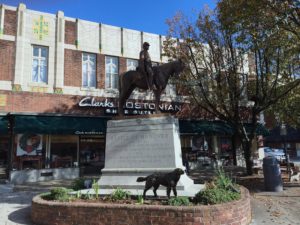 Gen. Judson Kilpatrick’s division of Union cavalry dashes north to Hanover, Pennsylvania, due east of Gettysburg. The Union men are treated to breakfast by the town and then begin to ride north out of town towards York.  As they were leaving, Confederate General JEB Stuart attacks the last Union regiment in town and surrounds it.

Brig. Gen. Elon Farnsworth turns his Federal brigade around and heads back to Hanover to rescue the lone regiment.  In a daring charge, Farnsworth’s men clear the town of the Rebels and nearly capture the famous General Stuart. As the Rebels gather reinforcements, General George A. Custer’s brigade arrives and with Farnsworth makes a stand against repeated attacks by the Confederates. The bulk of Stuart’s troopers are further down the road and are stuck behind the huge captured wagon train.  During a stalemate in the fight, both sides bring in more troops, but Stuart finds himself pinned down and in order to escape capture, they must leap a 15′ wide ditch.

Stuart retired to the hills south and east of Hanover, which gave him a good position that caused the Union forces to stop their own advances but this also delayed his reunion with General Lee in Gettysburg.