As I am enjoying a few days off with the family, I want to take this opportunity to wish each and every one of you, a very Blessed Easter.

Ever wonder what days  Easter fell on during the Civil War.?   Well, I looked it up:

Here is an entry in the diary of Union soldier Daniel Chisholm: “The beautiful Easter Sunday finds us all O.K. for it is as pretty and warm day, but we have no eggs. We could have them at 40 cents per doz. but I guess we will do without this time”-  (Menge, p. 7).

Here is a link to an Easter Sermon from 1862

Finally, here is a clipping from  April 1, 1861 edition of The Philadelphia Inquirer: 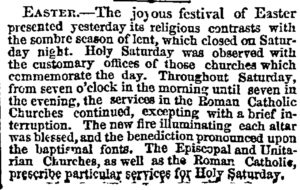 The joyous festival of Easter presented yesterday its religious contrasts with the sombre season of lent, which closed on Saturday night.  Holy Saturday was observed with the customary offices of those churches which commemorate the day.  Throughout Saturday, from seven o’clock in the morning until seven in the evening, the services in the roman catholic churches continued, excepting with a brief interruption.  The new fire illuminating each altar was blessed, and the benediction pronounced upon the baptismal fonts.  The Episcopal and Unitarian Churches, as well as the Roman Catholic, prescribe particular services for Holy Saturday.

Again, may the blessings of this Easter season be on you and your family.