Now that the dust has settled from the 150th commemoration of the Battle of Gettysburg, how doe the stories continue to be told for and by the next generation of leaders, historians, educators, and preservationists? Approximately 260 seventh-grade students at Gettysburg Area Middle School hopefully has an answer, as they have taken a different approach over the past year to learn about the history that took place right in their own community. They are part of the Journey Through Hallowed Ground Partnership’s nationally award-winning Of the Student, By the Student, For the Student® service-learning project, a groundbreaking initiative that engages middle-school students in interpreting the history within their own backyards. The students use primary source documents, humanities scholarship, music, dance, dramatic readings, role-playing and digital technology to create vodcasts or mini-movies for Gettysburg National Military Park. From beginning to end, the students serve as scriptwriters, actors, directors, choreographers, set designers, costume creators, videographers, and film editors to gain a deeper connection with our national history.

They ultimately created six vodcasts on topics such as the Gettysburg battle, its legacy, civilian life, and the African-American experience, including: Signal Corps, Barlow and Gordon, Sculptor Gutzon Borgium, Markers in Time, Shriver Family and the Black Ducks. The students premiered their vodcasts at the Journey Through Hallowed Ground Partnership’s annual conference, with filmmaker Ric Burns providing keynote remarks and addressing the student’s work directly. The vodcasts debuted in time for the 150th anniversary commemoration of the Battle of Gettysburg and will become official interpretative material for the National Park Service. They can also be viewed on YouTube, SchoolTube, Comcast on Demand, Teachinghistory.org, hallowedground.org, and other sites. 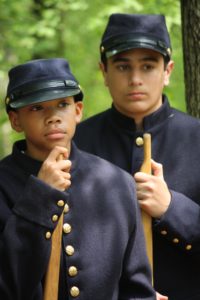