I recently had the opportunity to read Allen C. Guelzo`s latest work, Gettysburg: The Last Invasion. Guelzo is the Henry R. Luce Professor of the Civil War Era and the author of Lincoln’s Emancipation Proclamation: The End of Slavery in America and Abraham Lincoln: Redeemer President, both winners of the Lincoln Prize. 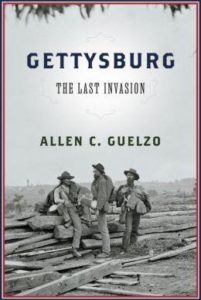 According the the publisher:

GETTYSBURG is the most intimate and richly readable account of the battle ever written, drawing the reader into the muck and grime of Gettysburg alongside the ordinary soldier. Guelzo shows us the face, sights, and sounds of combat: the stone walls and gunpowder clouds of Pickett’s Charge; the reason that the Army of Northern Virginia could be smelled before it could be seen; the march of thousands of men from the banks of the Rappahannock in Virginia to the Pennsylvania hills. What emerges is a previously untold story, from the personal politics roiling the Union and Confederate officer ranks, to the peculiar character of artillery units. Through such scrutiny the cornerstone battle of the Civil War is given extraordinarily vivid new life.

Overall, I enjoyed the book very much.   Throughout the book there are quotes from veterans detailing the events along which add to the richness of the story.  Guelzo uses these letters and his background to provide some good descriptions of the attacks on July 2.   The usual Gettysburg characters are there, from Warren saving Little Round Top to the delaying action of the 1st Minnesota.

Guelzo does seem to be critical of General Meade.  The author seems to conclude that Meade was forced to fight at Gettysburg by other generals.  Guelzo paints Meade as more of a subordinate to the others and that Meade did not have much impact on the overall battle.  The author discusses Meade’s Pipe Creek plan and says that Meade would have preferred to fight there instead.

I will leave the historical fact checking to the historians.  Overall though, this is a great book that I recommend you add to your bookshelf.