Finally catching up on some reading and another book I received is Yoke of Wind by Luke Comer.

According to the author: 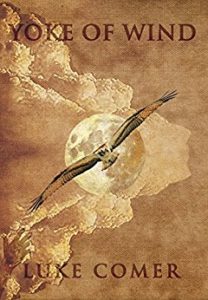 Before the Civil War, a slavemaster named Jonah takes his family and five of what he believes are his most loyal and trustworthy slaves to a remote and beautiful island off the coast of Florida. As soon they arrive, one of the slaves named Shaka lures the other slaves into his shamanic and animistic beliefs. When one pair of black, inverted wings appear on the island from nowhere, the slaves come into conflict with Jonah and soon revolt altogether.

As Jonah strives to repress the rebellion and his wife, Eloise, strives to reconvert the slaves back to Christianity, the slaves delve deeper into the Shamanic realms until Shaka reveals to them that they are preparing for an extraordinary exodus back to Africa.

While the island hovers on the verge of violence–and even madness–the whites and black are forced to confront the dark, secretive and sometimes loving relationships that existed between them through spending their lifetimes together on a raw and uncivilized plantation in the backwoods of Alabama. As the day of liberation approaches, the story increasingly turns and twists in ways the reader cannot imagine, as the characters see their ideas about their lives shattered–and eventually reconstructed anew.

Written in seamless, well-paced and poetic prose, this novel synthesizes several genres into one story: while driven by adventure and suspense, it simultaneously delves into the ideas behind our American culture–and then even deeper into the most repressed reaches of our mind. In the end an allegory emerges from the pages, at once painful and unflinching but healing, about the history of America.

Yoke of Wind is an interesting story about love, religion, and human morality during times of slavery.  Overall, the writing is good, but the narrative does leave something to be desired at certain parts. Some portions of the dialog are incorrect for the period and drag at certain points.  Some of the characters in the book, such as Jonah, are more relatable than others.  This is an unusual story filled with times of love and fighting.

Overall it is a good in terms of historical fiction but if you are an avid historian, you might want to skip this one.