On June 28, 1863, an important event took place in the small town of Chambersburg, Pa that changed the course of Robert E. Lee’s 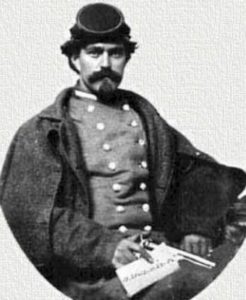 Invasion of the North. A Confederate spy by the name of Harrison came into camp and reported on the movements of Union troops. General Longstreet’s Chief of Staff, Moxley Sorrel wrote that Harrison straggled into the lines on the night of June 28, 1863 “filthy and ragged, showing some rough work and exposure.”

On that night, Harrison shared with Longstreet the news that Federal forces were located around Frederick, Maryland and advancing north, along with the news that Union General George Meade had replaced Joseph Hooker as commander of the Army of the Potomac. This news, caused General Lee to begin concentrating his troops near Gettysburg.

Henry Thomas Harrison, son of Henry Hargrove Harrison and Rebecca Pearson Harrison, was born near Nashville in April of 1832.  On September 28, 1863, Harrison married Laura Broders in Washington D.C. and they had two daughters, Elizabeth and Mary Irene. Harrison died on October 28, 1923, at Covington, KY.

It is interesting to think about what might have happened had Harrison not learned about Meade or the Union army movements or if he simply failed to deliver the news.  Would the Battle of Gettysburg have even happened?  What would have become of Lee’s invasion?