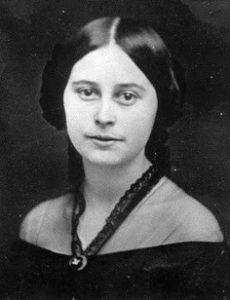 Emily Todd was Mary Todd Lincoln’s half-sister. In 1856 she married Benjamin Helm, later to become a Confederate general. After Helm’s death in 1863 Emily Helm passed through Union Lines to visit her sister in the White House. This caused great consternation in the Northern newspapers. Emily Helm took an oath of loyalty to the Union and was granted amnesty.

Benjamin Helm was the state’s attorney for the 3rd district of Kentucky from 1856 to 1858 when he married Emily. In March 1861, President Lincoln had offered him the job of army paymaster, which he declined.  He later joined the Confederacy and eventually was promoted to Brigadier General. General Ben fell at Chickamauga, 1863. An interesting side note is that one time while General Dan Sickles was visiting the Whitehouse he said to Emily that Confederate soldiers were “scoundrels and ran like scared rabbits” at Chattanooga, 1862. Sickles then went and complained to President Lincoln.  Emily took the opportunity and told Sickles that Confederate soldiers had only “followed the example the Federals had set them at Bull Run and Manassas.”

Emilie visited her sister again in the summer of 1864.  She recalled in her diary: “Mr. Lincoln and my sister met me with the warmest affection, we were all too grief-stricken at first for speech. I have lost my husband, they have lost their fine little son Willie and Mary and I have lost three brothers in the Confederate service. We could only embrace each other in silence and tears. Sister and I dined intimately, alone. Our tears gathered silently and feel unheeded as with choking voices we tried to talk of immaterial things.”