Confederate General Robert Edward Lee was born on this day in 1807. He was the fifth child of Henry “Light-Horse Harry” Lee. In 1829 he was graduated second in his class at West Point without having incurred a single demerit in his four years there. Commissioned in the Corps of Engineers, he served as a captain under General Winfield Scott in the Mexican War.  On June 30, 1831, Lee married Mary Anna Custis Lee who was the great-granddaughter of Martha Custis Washington at Arlington House in Virginia.

In 1852, he was appointed as superintendent of West Point. Three years later, with the approval of Jefferson Davis, then secretary of war, he transferred as a lieutenant colonel to the newly raised Second Cavalry and served in West Texas.

On April 18, 1861, Lee was offered command of the United States Army, however, the following day he received word that Virginia had seceded from the Union so he submitted his letter of resignation from the United States Army. Three days later, Lee accepted the position of commander of Virginia forces and on May 31, 1862, he was commanding The Army of Northern Virginia. He is best known for his victories in the Battle of Second Manassas and the Battle of Chancellorsville. On February 6, 1865, he was named General-In-Chief of all Confederate Armies until his surrender to General Grant at the Appomattox Court House on April 9, 1865, which ended the Civil War.

After the war, Lee returned to Richmond and during the last five years of his life he served as President of Washington College in Lexington, Virginia. Lee became ill on September 28, 1870, in Lexington and died a few weeks later on October 12.  His last words were said to have been “Strike the tent.”   Lee was buried in Lexington and remembered as an educator, a soldier, and a Christian gentleman who lived his life with dignity. Lee has been compared to General George Washington in terms of the respect which he earned from his soldiers, his region, and the nation.

This famous image of Robert E. Lee was taken on the back porch of the general’s house in Richmond by Mathew Brady on April 20, 1865. While I do not particularly like the way the brick color turned out, I am happy with the overall look of this colorization. 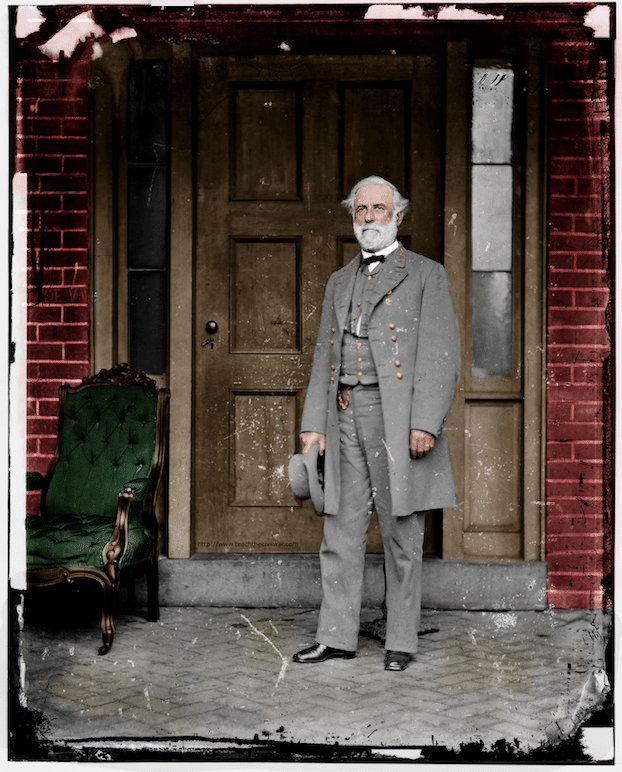