In 1865, Good Friday, the day that commemorates Christ’s crucifixion, fell on April 14th.    As we all know, Abraham Lincoln was shot on 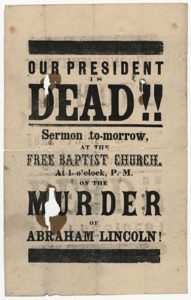 According to Harold Holzer, the chair of the U.S. Lincoln Bicentennial Commission, on that Easter Sunday in 1865, pastors across the country devoted their sermons to the memory of a man who had been “sacrificed on the altar of freedom and died for the nation’s sins.”

According to some newspaper accounts, the president’s death on Holy Saturday 1865 meant the red, white and blue bunting celebrating the war’s end was replaced with black crepe. Merchants sold out of every type of black material, from cheap muslim to the expensive black alpaca that draped the pulpit of President Lincoln’s pastor, The Rev. Dr. Phineas Gurley.

The York (PA) Daily Record has an interesting story about Black Easter.